Free Motion Quilting Challenge for May

Here we are again with another fun free motion quilting challenge from SewCalGal - and this month our teacher is Leah Day of 365 Days of Free Motion Quilting Filler Designs fame!  She is so generous with her knowledge and experience and time, and is currently my favorite blog personality (well, she's tied with the YarnHarlot for my favorite blogger, but Stephanie (YarnHarlot) is all about knitting, and we're talking FMQ here)!
So here it is, this month's lesson - Double Stippling and Railroad Tracks: 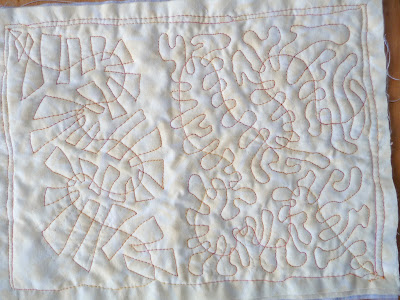 She calls these a "Foundational Design" because you start out with one large scale line (the foundation) that is used to anchor another smaller scale line of quilting pattern. 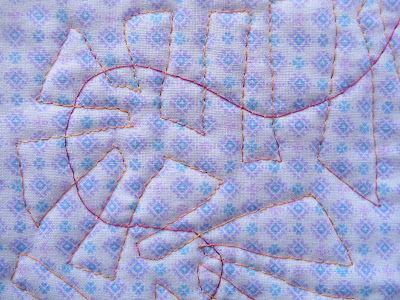 Here's the back of this sample so you can see what I mean - the darker pink line is the foundation (and yes, the tension is not great on this line - I was using up old random bobbins again and the thread didn't match my top thread).
The slightly variegated orangey thread is the double stippled railroad tracks (with better tension - it matches my top thread)

The challenge here is to anchor the smaller pattern onto the foundation, but still evenly and fluently fill up the empty space without either overcrowding or leaving big blank spaces.
The layout of your foundation is critical to success on this! 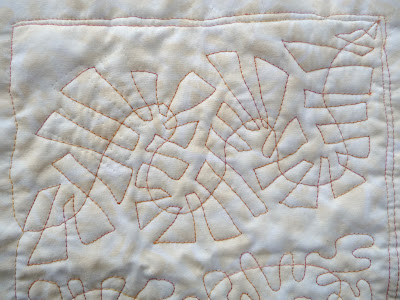 Railroad Tracks was a challenge since my foundation line didn't bring me into the left corner very well, and I was concentrating so much on keeping the shapes angular and not over-filling the centers, that I didn't spread out into the open areas enough!  Needs practice, but lots of fun. 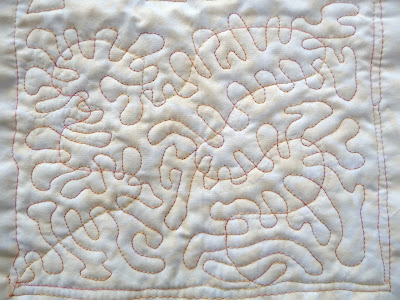 Got a bit more even coverage with the regular double stippling, though my foundation line gave me some challenges there too (lower right corner).

The other challenge for me is making a straight line (see the pathetic outline/frame stitches).  Who knew that would be so hard!  Lines want some practice, or some guide marks perhaps.

One really helpful thing I learned from watching Leah's videos, is to take your time - stop and look where you need to go next!  I have a tendency to try to figure it all out on the fly, and end up not making the lines flow and fill as well as they could.  I need to keep working on that relaxed stop-and-go attitude (hurry-er is not better - it's not even faster!).

This is a fun technique to use, and not hard (just needs a bit more practice) and will definitely get used somewhere on my quilts (and aren't those railroad tracks so cute!).

Basic info -
This month's thread is Superior Threads King Tut cotton 40/3 cottage colors 911 "Flower Pot" with a 90/14 topstitch needle (and once I switched to this in the bobbin too, I had no tension issues - though someday I need to try out one of those "bottom line" threads that are designed to go with King Tut).
Batting is Hobbs 80/20 cotton/poly.
Oh yes, and I took Leah's advice to use grippy gloves, but since I don't have any "Machingers", I just used a new pair of gardening gloves (with the little sticky bumps on the fingertips).  They worked great and really helped me control the fabric.
Posted by FarmNana at 6:16 PM 2 comments:

I love the texture of waffle weave, so when I saw "Waffle weave on a rigid-heddle?  Yes, you can!" by Kati Reeder Meek (in https://handwovenmagazine.com/free-table-runner-patterns-from-weaving-today/), I had to try it! 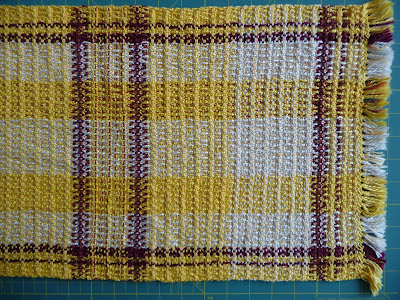 I made it as dishtowels instead of table runners, and totally messed around with the colors (the pattern is a sweet and simple blue and white) just for fun ('cos that's how I am). 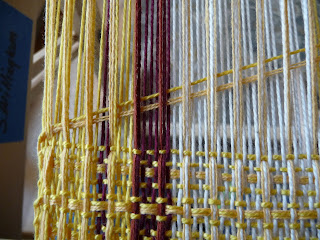 The waffle cells are created with floats which are made with the good old pick-up stick.  These float rows also have a double strand of 22/2 cottolin added.  This adds a little more depth and texture to these little waffle cells. 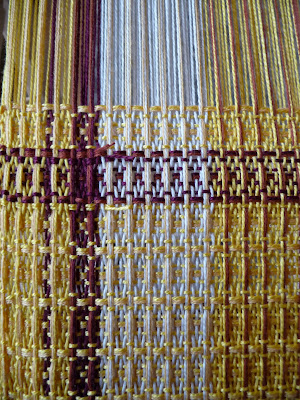 I also tried out slim boat shuttles with this, since the yarns were smaller than my usual knitting yarn, and could be easily wound on a bobbin.
They really worked just fine (except in that lower float shed where they did have a tendency to dive right down through those big spaces if I wasn't careful).
Worth using these again (so much faster to wind than a stick shuttle!).
Pick up is with the heddle down, pick up every other slot thread.  Then slide the pick up stick back to the back of the loom until you need it. 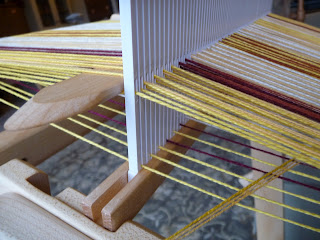 With the heddle up, the stick slides forward flat and a little shed drops down below - making weft floats on the bottom, and warp floats on the top.  (notice the 3 threads coming through the shed - one 3/2 cotton and two 22/2 cottolin) 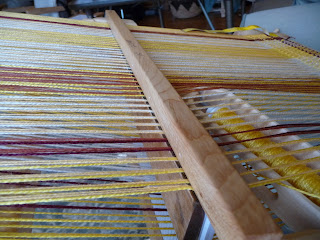 Then 2 shots of plain old plain weave with the 3/2 cotton alone.

With the heddle down (or in neutral- either one seems to work for this), the stick pops up on its edge and sits right behind the heddle - making the float shed on top.

Two more shots of plain weave with plain cotton, then back to the other float! 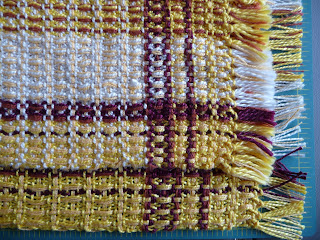 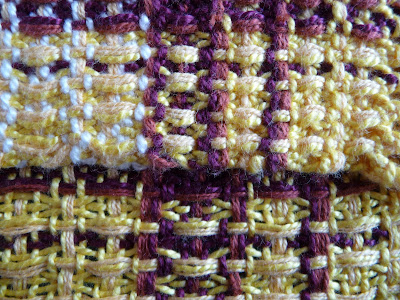 Here's a closeup so you can really see the weave structure with it's triple thread floats, and the amazing difference in size and texture between the washed (on top) and unwashed (on bottom) towels. 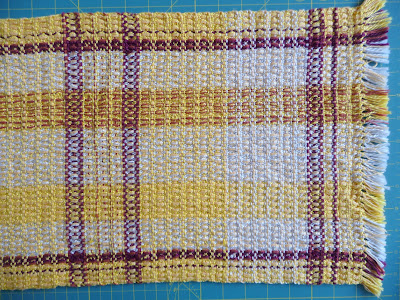 The pattern is not too difficult - I'd even say it was lots of fun!  And it comes out looking really fine, and now I have 2 really fun and functional dish towels! 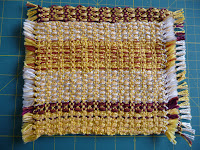