Something about Inlay (especially for Rigid Heddle Weavers)

I love playing with pick-up sticks, and I love the magic of inlay in all of its many variations (and there are many!).   For Rigid Heddle weavers, it's a relatively painless way to put geometric patterns and even more complex images into our woven projects - often only needing a pick-up stick (though sometimes multiple heddles are needed).

I've been having trouble finding a definitive definition of inlay, but Betty Linn Davenport has a pretty good one in her book Hands on Rigid Heddle Weaving.  To summarize, I've made a list of the characteristics that inlay usually exhibits:

Usually a heavier thread than the ground weft and the warp

Usually in a contrasting color/colors

And here are some resources that have inlay info and drafts and projects.

2.  And other important weaving books that have inlay info: 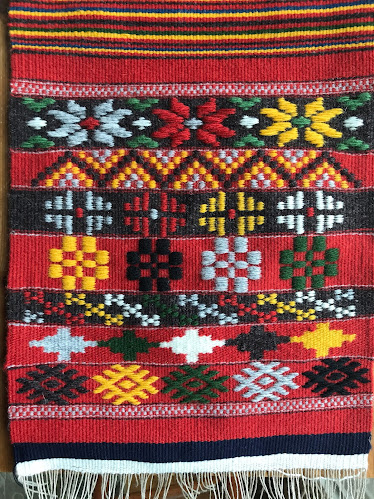 This is my sampler from a Joanna Hall class on Swedish Art Weaves - some done in class, some done later on my own.  From bottom to top, has Krabba, Rolokan, Halvkrabba, Monks Belt, Dukagång, more Halvkrabba, and more Krabba (playing with a larger scale on this one, to see if the floats are still manageable).

Not all of these rows are inlay.  Rolokan is not an inlay - though it is a discontinuous weft, its wefts form part of the ground structure and so they are not supplemental wefts ( Rolokan is a tapestry weaving technique).

Can Monks Belt be considered inlay?  I don't know.  In this sampler, it uses a discontinuous weft pattern that does float over the plain weave ground like the other inlays, so maybe?